“I came into the world charged with the duty to uphold the right in every place, to destroy sin and evil… the only reason I took birth was to see that righteousness may flourish, that good may live, and tyrants be torn out by their roots.”  Guru Gobind Singh Ji

Guru Gobind Singh Ji was the 10th Guru. He became Guru at only nine years old, after the martyrdom of his father, Guru Tegh Bahadur Ji. He is remembered as a warrior, poet, and philosopher whose contributions to Sikhi greatly shaped the way the faith is carried on today.

He is honored with many titles including Sarban Dani (the merciful donor, who sacrificed his all) because he was willing to sacrifice everything in order to help the Sangat and anyone in need.

From a young age, he promoted religious freedom and equality at any cost. As Guru, he instituted the Khalsa and gave them the duty to fight injustice and defend anyone who sought their aid. To aid in that mission, he established the five Sikh articles of faith (the 5Ks). He also finalized the Sikh scriptures and declared the Guru Granth Sahib Ji to be the eternal Guru. 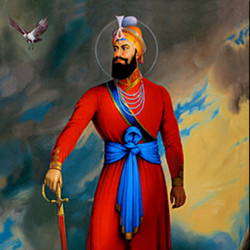 When Guru Gobind Singh Ji was nine years old his father told him that the rulers at the time were forcing Hindu scholars to convert to Islam.

Guru Tegh Bahadur Ji told his son, "Grave are the burdens the earth bears. She will be redeemed only if a truly worthy person comes forward to lay down his head. Distress will then be expunged and happiness ushered in."

Guru Gobind Singh Ji innocently replied, "None could be worthier than you to make such a sacrifice." 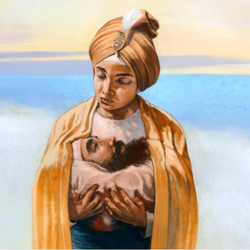 Later in life, Guru Gobind Singh Ji would again have to watch the people he loved sacrificed in order to help and protect others. This time, it was his four sons.

During an invasion by the Mughals, Guru Gobind Singh Ji’s sons, Ajit and Jujhar asked for permission to join the battle. They were skilled members of the Khalsa and would be able to ward off many of the invaders, but would likely perish in the fight. He agreed to their request.

During the same attack, his two younger sons, Zorawar and Fateh, were captured by the Mughals along with their grandmother (Guru Gobind Singh Ji’s mother). The boys were threatened with conversion to Islam or death.

Zorawar bravely faced the Mughals and said, “Death means nothing to me. Our death will fan the flames that will drive all the tyrants from the land.”

The boys were placed inside an unfinished wall and they recited Japji while the wall went up around them. Their grandmother died later that day when she heard the news.

When Guru Gobind Singh Ji heard of the bravery of his young sons and the cruelty of the Mughals, he wrote a famous letter (the Zafarnama) condemning the evil that Emperor Aurangzeb and the Mughals committed.

Today, Guru Gobind Singh Ji is remembered as the one who sacrificed four sons for the protection of many thousands (the Khalsa).

In 1699, during the Vaisakhi celebration, Guru Gobind Singh Ji drew his sword and called out, "I want one head, is there anyone who can offer me?"

The Sikhs were confused, so Guru Gobind Singh Ji called out again. Still, no one replied. On the third request, Daya Ram stood up and said, "O true king, my head is at your service." He followed Guru Gobind Singh Ji into his tent. A loud thud and slashing sound were heard.

At this point, many Sikhs were deeply disturbed and went to get Guru Gobind Singh Ji’s mother.

As they left, Mohkam Chand stood up and offered his head. They went into the tent and again an attack was heard. Guru Gobind Singh Ji came out and asked a fourth time and a fifth time. Himmat Chand and Sahib Chand answered these calls.

Then, he remained in the tent for a long time. When he finally came out he was followed by all five men who were now dressed like the Guru.

These five became the Panj Pyare (Five Beloved Ones). Their willingness to sacrifice their lives to the Guru was rewarded by being the first people initiated into the Khalsa, an order that Guru Gobind Singh Ji established that day.

The Amrit ceremony (rite of initiation) was first performed for these five. Then, they were given the honor of initiating Guru Gobind Singh Ji into the Khalsa as well.

Guru Gobind Singh Ji explained that Sikhs would have common last names (Singh for men and Kaur for women), and bestowed three sets of rules beginning with implementing five articles of faith. 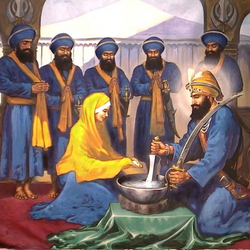 The Five Ks and Duties of the Khalsa

Guru Gobind Singh Ji wanted the Sikhs in the Khalsa to stand out and be recognizable as defenders of equality and a helper to anyone in need. The 5Ks also provided a uniform for the Khalsa that unified them.

The Khalsa were also instructed to meditate and recite certain prayers each day, They were forbidden from worshiping idols and could only believe in the One Supreme God.

Guru Gobind Singh Ji instructed them to never remove any hair on their body, use tobacco or intoxicants, eat or touch certain meats, and never commit adultery.

Finally, he encouraged all Sikhs to train in combat in order to be a Sant Sipahi (warrior saint). All Sikhs also are expected to feed the poor and protect anyone who asks for help. 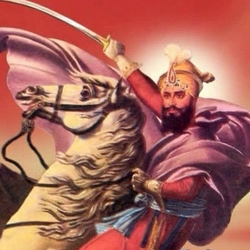 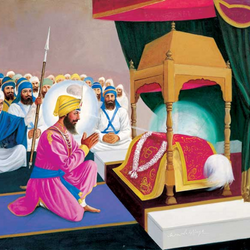