Mata Gujar Kaur was born in 1624 in Kartapur in the Punjab region of South Asia. Her parents were devoted Sikhs and raised her on the values and teachings of the Gurus. She married Guru Tegh Bahadur Ji at a young age, and they continued to learn and grow in their devotion to Sikhi together.

At 42, Mata Gujar Kaur gave birth to her first son, Guru Gobind Singh Ji. He became the 10th Sikh Guru at only nine years old after Guru Tegh Bahadur Ji sacrificed his life to defend religious freedom for all. 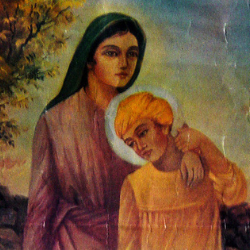 As the young Guru Gobind Singh Ji began his Guruship, Mata Gujar Kaur helped him with many responsibilities. Her devotion to Sikhi was especially apparent in the attention and dedication she gave her son.

As Guru Gobind Singh Ji grew up, he became a remarkable leader. He instituted the Khalsa and gave men and women a common surname to further combat the caste system.

Guru Gobind Singh Ji instructed all Sikh men to take the name “Singh,” which means lion and symbolizes strength. He also gave all Sikh women the surname “Kaur,” which means princess, and emphasized the power and importance of all women.

Mata Gujar Kaur Ji was the first woman to take the surname Kaur, and the rest of the community followed her example. 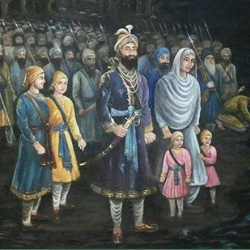 Mata Gujar Kaur Ji remained close to her son throughout her life and helped care for his children. When Guru Gobind Singh Ji and the Sikh Sangat were under siege from the Mughals in 1704, Mata Gujar Kaur Ji kept the youngest sons of Guru Gobind Singh Ji safe for as long as she could. Unfortunately, a former servant tricked her into fleeing the city with the young boys. The servant promised to help them get to safety, but instead, he turned her and the boys over to the Mughals.

Wazir Khan and the Mughals tried everything to force the boys to convert to Islam. Mata Gujar Kaur Ji gently reminded them of their faith and encouraged them to stay strong. The two boys were taken away from their grandmother but continued to refuse conversion. They continued reciting Japji until they were heroically martyred. Mata Gujar Kaur suffered a fatal heart attack when she heard the news. 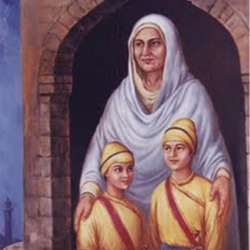 Despite the tragic ending, Mata Gujar Kaur Ji’s life exemplifies unwavering faith. From the loss of her husband to the trials her son endured and the final heartbreaking martyrdom of her grandchildren, she remained faithful to Sikhi. May we all learn from the faith of this heroic Sikh woman in history. 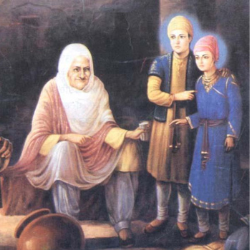