Guru Har Krishan Ji was the son of Guru Har Rai Ji and Mata Krishan Kaur Ji. After his father’s passing, he became the 8th Sikh Guru at only 5 years old.

Despite his young age, Guru Har Krishan Ji is lauded for his supreme spirituality and wisdom. It was said that even looking upon Guru Har Krishan Ji made one wiser. Throughout his short life, he encouraged Sikhs to practice virtue, especially the virtues of patience, charity, and love.

When a smallpox epidemic emerged, Guru Har Krishan Ji cared for the sick without concern for his own health. A lake in Bangla Sahib was blessed by the Guru’s grace and provided a cure for thousands of people. Ultimately, Guru Har Krishan Ji contracted the disease and passed away at 8 years old.

He is remembered for his spirituality, wisdom, and selfless service. 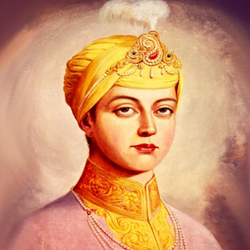 Spirituality
Guru Har Krishan Ji and his brother Ram Rai were raised listening to Kirtan and meditating often. As boys, they both were models of devotion. One day some Sikhs asked Guru Har Rai Ji which of his sons was more devout. Guru Har Rai Ji told them that the next time they saw the boys meditating they should take a needle and poke the boys’ chairs.

When the boys began meditating, the Sikhs went over to the chair of Ram Rai and poked it with a needle. The wood was hard and prevented the needle from going through. The Sikhs then poked the chair of Har Krishan. The chair became like wax and the needle passed through without issue.

The Sikhs went back to Guru Har Rai Ji who said that Har Krishan’s love and devotion for God not only softened his own soul but even softened the chair upon which he sat. Guru Har Rai Ji also predicted that a day was coming when even glancing upon Har Krishan would cause one’s heart to soften. 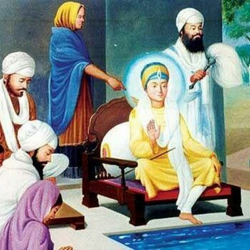 Wisdom
Guru Har Krishan Ji became famous for his wisdom. At only 5 years old, he could translate and interpret the teachings of past Gurus with ease. He was also known to open the minds and hearts of people near him.

Guru Har Krishan Ji smiled at Chajju and placed his chhadee (stick) on his forehead. Immediately, Chajju’s face changed as his heart was filled with Guru Har Krishan Ji’s wisdom. Guru Ji then asked the challenger to direct any questions to Chajju, who answered them perfectly. 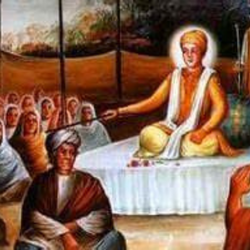 Selfless Service
During Guru Har Krishan Ji’s time, there was a smallpox epidemic in India. The young Guru took care of anyone suffering, regardless of their caste or religion. Everyone became so impressed by his generous spirit that even the cruel Aurangzeb did not prevent Guru Har Krishan Ji from his work.

Guru Har Krishan Ji cured thousands of people before contracting smallpox himself. When his mother asked him why he could cure others but not himself he responded, "He who has taken this mortal frame must go through sickness and disease. Both happiness and suffering are part of life. What is ordained must happen. This is what Guru Nanak taught. Whatever He does is His order. One must walk in the light of His command." 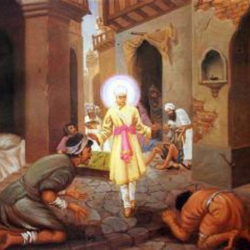 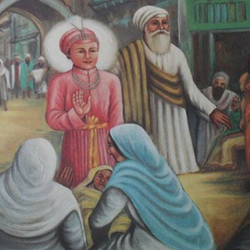 At only 8-years-old, Guru Har Krishan Ji’s earthly life came to an end. Before his passing, he announced that the next Guru would be found in “Baba Bakala.” This led to a search for Guru Tegh Bahadur Ji.