Guru Nanak Dev Ji was the founder of Sikhi and became our first Guru. He was born in 1469 in the village of Talwandi. Even as a child, people knew that he was special.

On many occasions, a young Guru Nanak Dev Ji would astound teachers with his contemplation and knowledge. By 16, he was fluent in Sanskrit, Persian, and Hindi which enabled him to understand many religious texts.

While his family was Hindu, he refused to partake in certain practices like the worship of demi-gods and religious rituals. He also called out the injustice and cruelty of the caste system from an early age.

He famously had a spiritual awakening when he was 28 years old. He went down to a river to bathe and meditate and disappeared for three days. When he came back he silently quit his job, gave away all of his belongings, and set out with his childhood friend Mardana to explain what he learned during that experience.

He is remembered for founding Sikhi, advocating for women’s rights and equality, condemning the caste system, instituting communal kitchens that feed anyone (langar), emphasizing the importance of selfless service (seva), and preaching the necessity to center our lives around God. 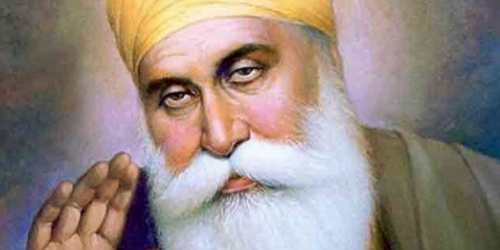 Establishing the three pillars of Sikhi

Naam Japna emphasizes the importance of keeping our thoughts and lives directed toward God. Guru Nanak Dev Ji encouraged Sikhs to remember God at all times in order to remove the ego. He also encouraged them to meditate on God through chant, song, and recitation in addition to studying.

Kirat Karni urges Sikhs to live honest lives. We should work hard and be truthful in all we do, especially in our careers. This work that we do fills up most of our days and should make us better people.

Vand Chakna reminds us to be generous to those in need and our communities. We should use our blessings, talents, and treasure to help others. This further amplified Guru Nanak Dev Ji’s call for all Sikhs to share and give.

All three pillars create a world where equality can thrive. If we recognize God in every person,  we must treat them as equals. From these three pillars, his other teachings flowed.

Women’s Rights and Empowerment
“From woman, man is born; within woman, man is conceived; to woman, he is engaged and married. Woman becomes his friend; through woman, the future generations come.”

Guru Nanak Dev Ji challenged the many injustices he saw in the world around him. One of the most prevalent issues was the treatment of women.

At the time, women were not given economic freedom, education, or independence. Their lives were meant to be oriented towards serving their husbands and maintaining the household.

Guru Nanak Dev Ji became an advocate for women. He questioned the institutions and traditions that kept women oppressed. He made an equal place for them in Sikhi.

Today, women continue to hold leadership roles within the Sikh faith, serve side-by-side with men, and participate in all religious and social activities in a Gurdwara.

Fighting the Caste System
“He who regards all men as equals is religious.”

Guru Nanak Dev Ji also saw inequality prosper under the caste system. His spiritual awakening centered around the revelation that God is one and all of creation is part of that oneness. If every person is part of God, then we are all equal.

This did not conform to the caste system that was prevalent at the time. From a young age, Guru Nanak Dev Ji expressed his disdain for the treatment of lower caste members by the higher castes. He also spoke out against the mistreatment members of different religions showed each other.

Sikhi would grow over the years to intentionally remove any status. Langar is eaten with everyone on the floor together, all Sikhs have common family names, people of every faith and background are welcome in the Gurdwara, and turbans (which were usually worn by higher caste members) are worn by anyone.

Instituting Langar and Seva
“No bargain can be more truly profitable than to feed and clothe the needy.”

In Sikhi, being part of God’s oneness means we have a duty to serve our fellow humans. We are all a part of the same whole.

Vand Chakna tells us to share and give. This principle of sharing with our communities and giving what we can is the foundation for two Sikh practices seva (selfless service) and langar (communal meal).

Seva is the use of our talents, time, and treasure to help our communities and those in need. Guru Nanak Dev Ji gave up everything to the poor when he began his mission. He repeatedly called for others to give and share with the people around them.

Langar naturally came from seva and Guru Nanak Dev Ji’s commitment to equality. This is our communal meal that is open to anyone. People from every caste, religion, race, gender, etc. are welcome. Sikhs have served food to millions of people in this way and we continue this practice today. The meal is traditionally eaten on the floor to emphasize equality. No one sits above another person.

Centering our lives around God
“The happiness of man does not lay in the wealth and power he accumulates, but in his moral and spiritual achievements.”

Guru Nanak Dev Ji had incredible teachings that encouraged his followers (of every faith) to be tolerant, kind, and humble. He knew that our exterior actions can greatly impact our interior soul. By seeing God everywhere, working hard, serving our fellow people, and promoting equality, we are centering our lives around God and preparing our souls to ultimately, fully join the oneness.

As Guru Nanak Dev Ji neared the end of his earthly life his followers argued over how to perform a funeral. The Sikhs and Hindus wanted to cremate him but the Muslims wanted to bury his body and prepare a grave for him. Guru Nanak Dev Ji explained the concept of joti jot (light joining light). His spirit would go on to join with the Eternal Light and what happened to his body was not of great importance.

Still, the followers wanted to honor the body of their great Guru, so Guru Nanak Dev Ji told them that the Hindus and Sikhs could leave flowers on the right side of his body and the Muslims could put flowers on the left side. In the morning, whichever flowers had not wilted would determine who could decide on the funeral proceedings.

The morning after his spirit joined with God, the followers checked on the body and found that it had disappeared. All that was left was fresh flowers on all sides. The Hindus and Sikhs took their flowers to cremate and the Hindus buried the flowers on their side. Thus, Guru Nanak Dev Ji was buried in a way that resonated with everyone. 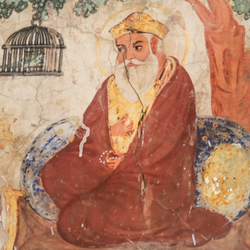 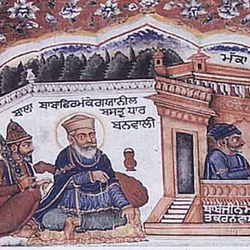 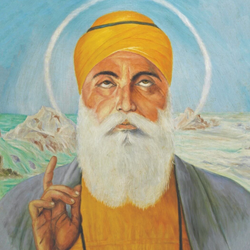 The guruship was then passed to Guru Angad Dev Ji.