Three Ways to Relive Our Fourth of July

We Are Sikhs Fresno celebrated the Fourth of July this year by sponsoring the Visalia 4th of July Fireworks Extravaganza, throwing out the first pitch at the Fresno Grizzlies baseball game, and sponsoring the Selma Cultural Exchange!

Sikhs are proud Americans who are dedicated to sharing our skills, wealth and time to better the lives of those around us. We’re grateful for the opportunity to serve our neighbors and celebrate our nation’s independence in communities across the San Joaquin Valley!

When the mayor of Visalia, in California's agricultural Central Valley, mentioned to a local Sikh businessman that the city of 120,000 might have to forgo a July Fourth fireworks display because of financial concerns, the religious community jumped...The donation is part of a new nationwide campaign to educate Americans about Sikhs that launched earlier this year.

Fourth of July, our national birthday is celebrated by families across America with backyard barbecues, fireworks, swim parties and community events. In Visalia, one organization is connecting communities together and celebrating freedom with fireworks and fun...We Are Sikhs Fresno, is a local nonprofit part of a national movement to bring awareness of the Sikh population in America and in the neighborhoods we call home.

Read more in the Visalia Times-Delta

The sweet sounds of the 4th of July make everyone at Visalia's Independence Day celebration proud to be an American, but what would this day be without fireworks? Amrit Singh says he knew he needed to make a difference when the mayor told him the fireworks show may not happen.

They are your neighbors, your doctors, your leaders in the community, but not always treated like equals. "... we're Sikhs, our religion preaches peace and one of the biggest things our religion teaches us is that we're all fruits from the same tree." Sran passes those values down to the kids on her dance team. They deal with the same things, but not here. At a park in Selma, a movement is underway to promote tolerance and religious freedom.

Watch the full video on ABC30.com

VIEW photos from the event: 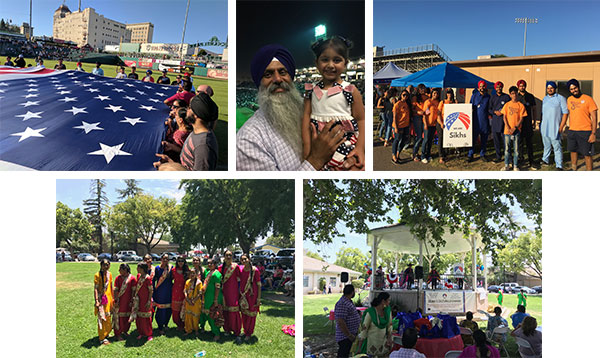 We were proud to help bring our neighbors together to honor the freedoms we have to be who we are, believe what we believe, and celebrate the differences that bring us together as Americans.

We can’t wait until next year!