"Birth and caste are of no avail before God. It is one’s deeds that make or unmake a man." - Guru Ram Das Ji

Guru Ram Das Ji was the fourth Sikh Guru. He was a great speaker, poet, and author. He emphasized the importance of kirtan (Sikh hymns) and wrote 638 hymns which are included in the Guru Granth Sahib Ji (the Sikh holy book).

He embodied compassion, empathy, and humility. According to Guru Ram Das Ji, these qualities rid us of the temptation of pride (ahankaar) and they help us recognize that life is fulfilled through sharing in the joys and sorrows of others.

Guru Ram Das Ji also wrote the Laavan hymn which the Sikh wedding ceremony (Anand Karaj) is centered around. It includes beautiful reflections on marriage including: “They are not said to be husband and wife who merely sit together. Rather, they alone are called husband and wife, who have one soul in two bodies.”

He is remembered for exemplifying seva (selfless service), expanding Sikhi throughout the region, and advocating for equality. 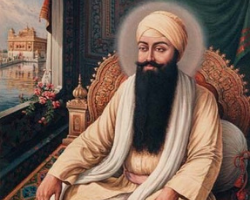 When the Mughal court brought charges against Guru Amar Das Ji, Bhai Jetha Mal Sodhi went to the court to represent the Guru. A group of Hindus accused Sikhs of misrepresenting the Hindu and Muslim religions. Bhai Jetha Mal Sodhi eloquently defended the Sikh teachings and the respect Sikhs hold for people of all beliefs. The emperor was so impressed by his words, that all charges were dismissed. 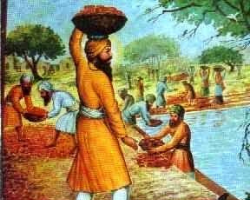 Guru Ram Das Ji’s commitment to seva played a critical role in his expansion of the Sikh faith around the region. He physically labored to build the city of Goindwal (founded by Guru Amar Das Ji) by tirelessly assisting with construction. He built up the Sikh community in the city by supporting and serving them.

As Guru, he founded the city of Amritsar, an important city for Sikhs. He laid the foundation in 1570 and built up the city throughout his life. It is now the home of Sri Harmandir Sahib (the Golden Temple), which is one of Sikhi’s holiest sites. 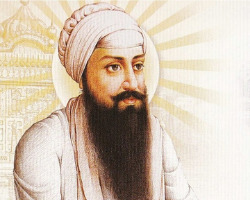 Like the Gurus before him, Guru Ram Das Ji was strictly opposed to the caste system. He advocated for equality in every community. He emphasized the openness of Sikhi to people of every caste, saying,

"Birth and caste are of no avail before God. It is one’s deeds that make or unmake a man. To exploit ignorant people with superstitions and to call it religion is a sacrilege against God and man. To worship the infinite, formless and absolute God in the form of a totem, an image or an insignificant time-bound object of nature; to lead people to believe that they can wash away their sins, not through compassion and self-surrender, but through ablutions; to insist upon special diets-what to eat and what not to eat; to say that a certain language and dress allows access to God and to condemn masses of human beings, men, women, and children, to the status of sub-humans, who are not even allowed to learn to read the scriptures that they are told rule their lives; never allowed to enter a house of worship; who are allowed to do only the lowest degrading work, is to tear man apart from man. This is not religion nor is it religion to deny the world by becoming an ascetic, for it is in the world alone that man can find his spiritual possibilities."

Once, a group of low caste men came to Guru Ram Das Ji because the high caste Hindus would not allow them to worship. Guru Ram Das Ji told them, “Nanak’s sanctuary is open to all irrespective of their social status...whoever comes to the heaven of Guru Nanak will save himself...and will carry his ancestors and future generations across as well.”

Guru Ram Das Ji knew that dismantling the caste system, especially when it was a barrier for religious practice, would fundamentally change the oppression and inequality plaguing their communities. 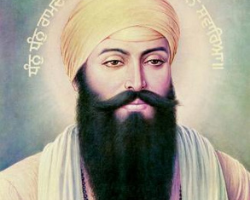