"When all are born of the same light, how can some be good and others bad?"  - Guru Arjan Dev Ji

Guru Arjan Dev Ji was the son of Guru Ram Das Ji and Bibi Bhani Ji (the daughter of Guru Amar Das Ji). He became the fifth Sikh Guru and the first Sikh Guru to be martyred. His accomplishments include finishing the construction of the Harmandir Sahib (Golden Temple) in Amritsar, India.

During his life, he contributed 2,218 hymns to the Guru Granth Sahib Ji. He is most noted for composing the popular Sikh prayer, “Sukhmani Sahib Bani” meaning “Prayer of Peace.” It is clear from these hymns and the stories of his life that Guru Arjan Dev Ji was the embodiment of Godly devotion, selfless service, and universal love.

He is remembered for furthering the teachings on seva, promoting equality, implementing the practice of giving a regular dasvandh (donation), and enduring torture and death in order to defend his Sikh faith.

Guru Arjan Dev Ji was always serving others. He helped the poor, treated the sick, and built hospitals for people suffering from leprosy. He found ways to serve anyone in need.

There once was a group of Sikh travelers from Kabul, Afghanistan who set up camp outside Amritsar, where Guru Arjan Dev Ji lived. When he heard they were nearby, Guru Arjan Dev Ji personally went out to their campsite with food and water. He served these weary travelers without them recognizing him; even washing their feet.

The next day when they entered Amritsar the travelers met with Guru Ji and realized he was the one who served them. They were astonished by his devotion to seva and to the radical equality, he modeled through the kindness and reverence he showed them. 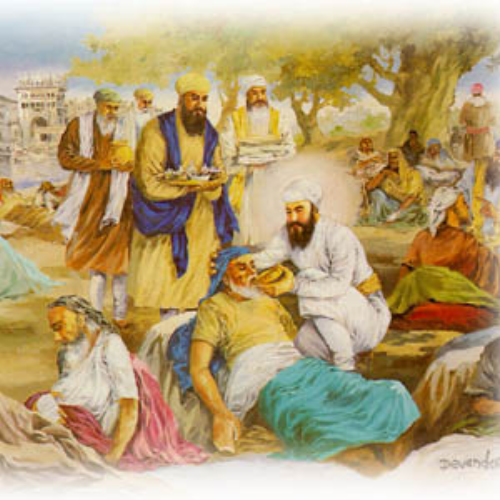 Equality was a tremendous part of Guru Arjan Dev Ji’s mission. He built the Harmandir Sahib (Golden Temple) with four entrances facing all four directions (North, South, East, and West). In this way, the temple was open to anyone from any direction. As he said,

This was a radical claim during his time, as religious persecution and forced conversions were commonplace. But Guru Arjan Dev Ji truly believed “when all are born of the same light, how can some be good and others bad?” 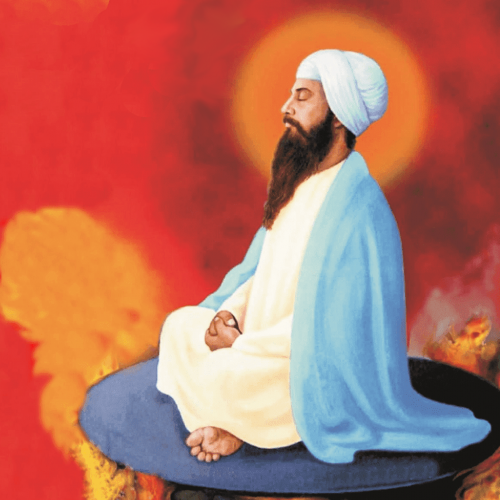 In order to build Harmandir Sahib, Guru Arjan Dev Ji encouraged Sikhs to begin the practice of offering a dasvandh (donation). The Sikhs were asked to save a tenth of their income to help fund the construction.

After the city and Harmandir Sahib were established, Guru Arjan Dev Ji continued to encourage all Sikhs to give 10% of their earnings to charities as an act of Seva. This practice is continued today and is similar to practices in other religions like tithing for Christians, a Zakat for Muslims, or a Dāna for Buddhists and Hindus.

The practice of offering a dasvandh encourages generosity and selfless service. It ensures that charitable work is funded and able to reach those in need. 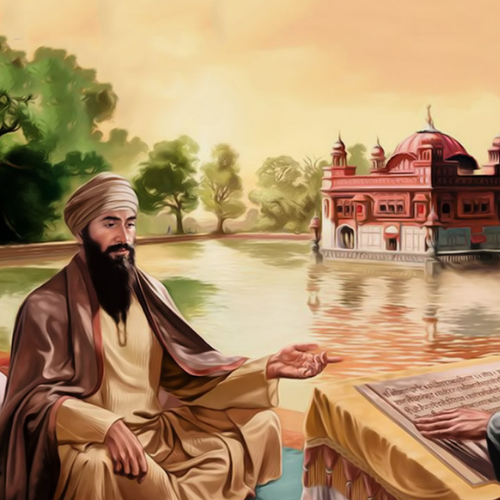 His expansion of the Sikh faith and the teachings Guru Arjan Dev Ji added to the Adi Granth (the Sikh holy book at the time) drew the wrath of Emperor Jahangir. Guru Arjan Dev Ji was imprisoned and when he refused to convert, he was tortured for five days:

On the first day, Guru Arjan Dev Ji was refused any food, drink, or sleep. As his hunger, thirst, and exhaustion grew, Guru Ji repeated Simran, “Waheguru,”  and sang hymns.

On the third day, Guru Arjan Dev Ji was forced to sit in boiling water while scorching hot sand was poured over him. This torture occurred during the hottest time of the year. Guru Arjan Dev Ji kept his thoughts on Waheguru and repeated, “O Waheguru! Your actions seem so sweet to me.” - “Tera kee-aa meethaa lagaai.”

On the fourth day, the emperor prepared a scalding iron plate above a fire and made Guru Arjan Dev Ji sit upon it while hot sand was again poured over his body. Again, he kept his thoughts on Waheguru.

On the fifth day, Guru Arjan Dev Ji asked to go down to the Ravi River for a bath. The emperor agreed, thinking the water would further irritate the wounds. Crowds watched as Guru Ji immersed himself into the river and they waited for him to rise back up, but he never did. His body was nowhere to be found.

As the first Sikh Guru to be martyred he is revered as “Shaheedan de Sartaaj” meaning “Crown of Martyrs.” 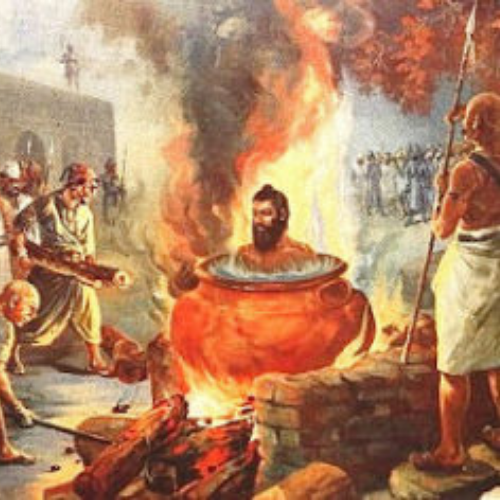 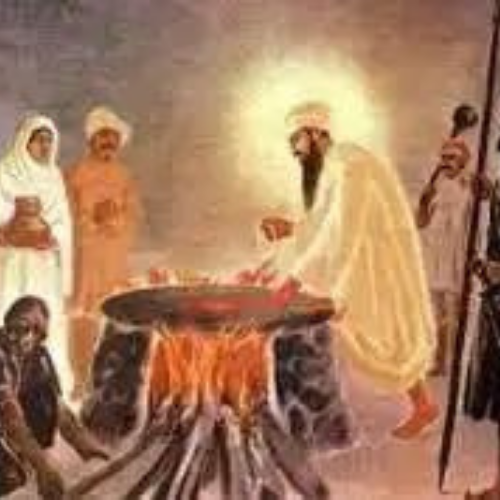