"Obey the Granth Sahib, for it is the visible body of the Guru." - Guru Gobind Singh Ji

After ten human Gurus, Guru Gobind Singh Ji passed the Guruship to a final and eternal Guru: the Guru Granth Sahib Ji. It is not merely a book but the vessel for the living words of the Gurus.

The Guru Granth Sahib Ji is the final version of the Adi Granth, the collection of hymns by our Gurus along with excerpts from Muslim and Hindu saints. The first version was carefully compiled by the fifth Guru, Guru Arjan Dev Ji, in 1604.

In 1708, Guru Gobind Singh Ji finalized the Adi Granth, renamed it, and set it as his successor. Within the 1,430 pages, you will find the wisdom, guidance, and spirit of our Gurus today. 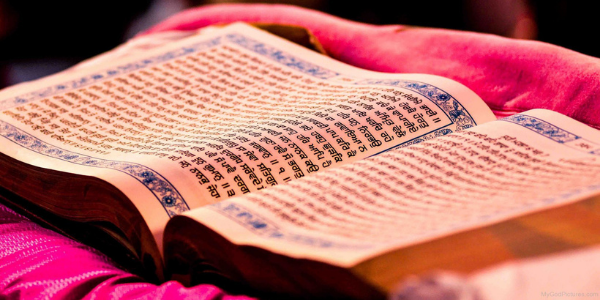 The History of the Guru Granth Sahib Ji

Guru Nanak Dev Ji, the founder of Sikhi, was known as the “Singing Guru” because of the many hymns he sang to his followers. Guru Angad Dev Ji, the second Sikh Guru, encouraged Sikhs to gather and sing Guru Nanak Dev Ji’s hymns together, which continued with Guru Amar Das Ji and Guru Ram Das Ji who also wrote their own hymns.

Guru Arjan Dev Ji, the 5th Guru, learned that his brother was distributing his own hymns under the name of Guru Nanak Dev Ji. Guru Arjan Dev Ji recognized that this could lead to confusion if there was not an official compilation.

He gathered hymns from Sikh communities and reached out to the son of Guru Amar Das Ji, Mohan, to collect the writings of the first few Gurus. Mohan was still upset that his father had not chosen him to be Guru.

Guru Arjan Dev Ji went to Mohan’s house, but instead of knocking, sat on the doorstep and sang. Mohan threw open the window and shouted, "You stole the Guruship from my family, and now you come to steal what remains of my heritage!"

Guru Arjan Dev Ji just continued singing his song of praise to God. Grumbling, Mohan went down to the doorstep and sat with him.

It took several drafts to complete the Adi Granth. Guru Arjan Dev Ji would pour over all of the manuscripts he received and weed out the false hymns. His scribe Bhai Gurdas Sahib Ji asked him how he knew which hymns were authentic. Guru Arjan Dev Ji replied, "Even in a great herd of cows and calves, the mother cow will recognize the cry of her calf, above all others. Just so, the True Shabad resonates truly, and is easily distinguished from the false."

In the process of compiling the Adi Granth, Guru Arjan Dev Ji added his own hymns, along with the Shabads of 36 Hindu and Muslim saints. By adding the teachings of non-Sikhs, he emphasized the Sikh belief in a oneness that is not threatened by alternative belief systems but accepts them all as one.

In 1604, Guru Arjan Dev Ji and Bhai Gurdas Sahib Ji finished their work. The Adi Granth was installed at the Harmandir Sahib (the Golden Temple) and the first reading took place on August 16, 1604. 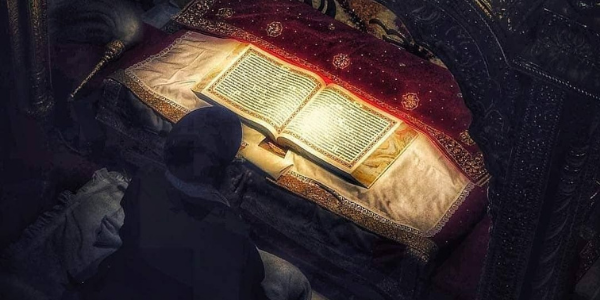 During the Guruship of Guru Gobind Singh Ji, the tenth Guru, there were several false versions of the Adi Granth being published. He had to create a final version.

The entire Adi Granth was transcribed, including 115 new hymns from his father, Guru Tegh Bahadur Ji. He did not, however, include his own hymns.

On October 20, 1708, as Guru Gobind Singh Ji was approaching the end of his earthly life, he installed the updated and finalized Adi Granth as his successor. He gave it the title Guru Granth Sahib Ji and said, "O Beloved Khalsa, let any who desire to behold me, behold the Guru Granth. Obey the Granth Sahib, for it is the visible body of the Guru. Let any who desire to meet me, diligently search its Bani (teachings)." 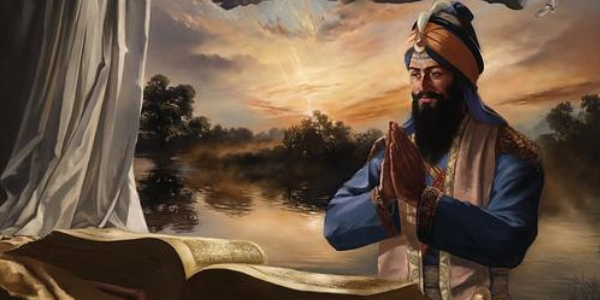 How Sikhs interact with the Guru Granth Sahib Ji today

The Guru Granth Sahib Ji continues to be revered today. The words of the Gurus are contained in the pages that call us all to deeper meditation.

At night, the Guru Granth Sahib Ji is placed on a bed or small cot which also has a canopy. If it becomes old, worn, or is no longer required for another reason it must be respectfully cremated.

When in the presence of the Guru Granth Sahib Ji, everyone must cover their heads, remove their shoes, and show respect by bowing to the floor if it passes by. During any service, people must refrain from eating, drinking, or talking while Guru Granth Sahib Ji is in their presence.

Most Sikhs do not have a Guru Granth Sahib Ji in their homes. They may have a copy of the Dasam Granth (Guru Gobind Singh Ji’s writings), the Japji Sahib (a compilation of prayers), and/or a Gutka (prayer book).

All of these reverences and rules remind us that the Guru Granth Sahib Ji is our eternal Guru. 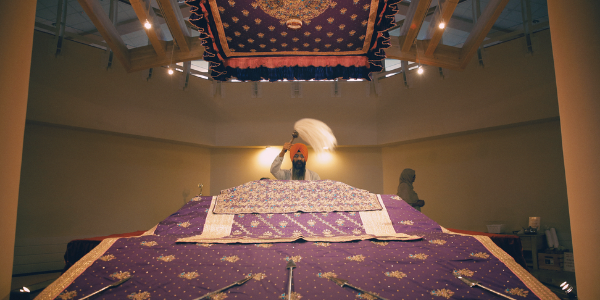 The Guru Granth Sahib Ji can be confusing to understand at first, but through learning the history of how it was created and meditating on the words within we see that it is continuing to provide enlightenment and peace to all of us today.