"Balwand says that Khivi, the Guru`s wife, is a noblewoman, who gives soothing, leafy shade to all. She distributes the bounty of the Guru`s Langar; the kheer – the rice pudding and ghee – is like sweet ambrosia." Guru Granth Sahib Ji, Page 967

Mata Khivi was born in Sanghar (modern-day Sindh, Pakistan) in 1506 to a wealthy, Hindu family, as her father was a trader and shopkeeper who was well-respected in the community.

She was married to a Hindu man named Lehna (or Lahina), who would later become Guru Angad Dev Ji, and they had four children, Dasu, Bibi Amro, Bibi Anokhi, and Datu.

Lehna and Mata Khivi inherited her father’s shop and continued to provide a life of luxury for their family. But, on one of Lehna’s annual pilgrimages, he heard the teachings of Guru Nanak Dev Ji. Immediately, he stopped his journey and begged to serve the Guru and become his disciple. Lehna was so drawn to the Truth Guru Nanak Dev Ji taught, that he completely devoted himself to his teachings and service. Guru Nanak Dev Ji was impressed with Lehna and gave him the name “Angad” or “limb” of Guru Nanak.

Guru Nanak Dev Ji preached about gender equality and the importance of family. He even sent Angad back home to be with his family and spread his message to everyone he met.

Angad was a passionate disciple and Mata Khivi shared in his enthusiasm for Sikhi. When Guru Nanak Dev Ji passed, Angad was declared the second Sikh Guru or Guru Angad Dev Ji. 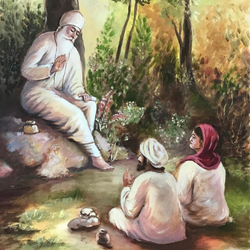 Mata Khivi took her role as the wife of the Guru very seriously. People were constantly coming to her home to meet with the Guru, and she hosted them with utmost generosity.

She used the finest ingredients for all of her guests, regardless of their caste, creed, race, or gender. This is why Mata Khivi is credited with instituting Langar, the Sikh practice of providing food to anyone who comes to the Guru’s house (or to Gurdwaras today).

Mata Khivi’s generosity and kindness were especially evident in her affection for her children and every child she met. She and Guru Angad Dev Ji were determined to make Sikhi accessible to kids. Guru Angad Dev Ji created a modified version of Punjabi that was easier to learn, which eventually became the Gurmukhi script used in the Guru Granth Sahib Ji.

Mata Khivi’s instrumental role in organizing the early Sikh sangat (community) is noted in the Guru Granth Sahib Ji. She is the only wife of a Guru to be mentioned and she is described as a "good person," “an affectionate mother," and as "one who provides shelter and protection to others." 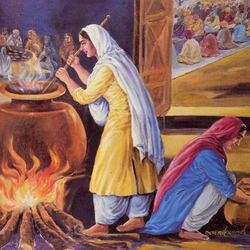 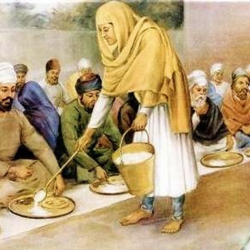 Mata Khivi survived Guru Angad Dev Ji for thirty years and played a crucial role in maintaining peace and unity in the sangat during the transition to Guru Amar Das Ji.

Mata Khivi and Guru Angad Dev Ji’s son, Datu, was very upset that he was not found to be the third Guru. His friends encouraged him to declare himself Guru. As soon as he began acting as Guru, Datu suffered from horrible headaches.

His mother told him that the headaches came from trying to hold too much power. The only way to be cured was to apologize to the true Guru. Datu agreed and Mata Khivi took him to Guru Amar Das Ji. All was forgiven and Datu’s headaches disappeared.

Guru Amar Das Ji had great respect for Mata Khivi. Her children became great preachers for Sikhi and she continued to oversee and provide Langar for everyone.

When Guru Amar Das Ji organized districts for Sikhi, he gave a Manji (territory or diocese) to Mata Khivi for her to oversee. She was responsible for preaching, handling finances, and tending to the needs of all within her Manji. 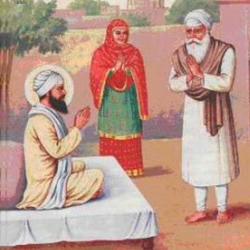 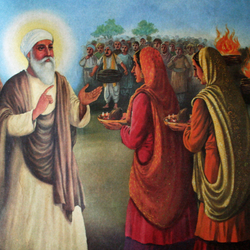 The Sikh spirit of hospitality and generosity was first lived out in the life of Mata Khivi. Her story continues to inspire Sikhs to care for their communities and families with more passion, joy, and selfless service.